Back to the Playhouse III

Today my energy level still was not 100%, so I moved in slow motion and did not build as much as I planned.  I cut the pieces for the east wall and fastened about half the parts together.  I did not fasten the parts in the middle.  I found myself redesigning the wall on-the-fly.  Originally, I was going to make two windows with the top window smaller than the bottom window.  Then I decided to simplify my design, and make both windows the same size.  So here's the framing as I just described. 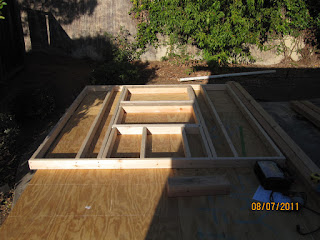 But now I have a new idea to just have one window in the east wall frame and move the top window up to the portion of the wall formed by the roof framing.  I'll post a picture of this tomorrow.
Posted by Gerald at 11:07 PM

Email ThisBlogThis!Share to TwitterShare to FacebookShare to Pinterest
Labels: Playhouse