I'm still chipping away at the roof this weekend.  I finished installing the last plywood panel.  Then I applied aluminum duct tape over the gaps between the panels.  These gaps would have been covered up by the shingles, but I opted to add this extra coverage.  Then I started applying the asphalt coated felt paper over the plywood panels, but I have a lot more to do.

Today I spent time going for a outdoor nature walk with the family at Rancho San Antonio, so I only had a couple hours of sun light left to chip away at the playhouse roof.  I just have one more panel left to install on the south side of the roof.  Then I can move on to protecting the roof edges, paper over the panels, and install shingles. 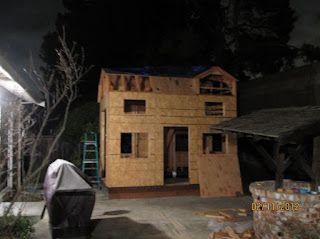 Posted by Gerald at 9:30 PM No comments:

Email ThisBlogThis!Share to TwitterShare to FacebookShare to Pinterest
Labels: Playhouse

I continued where I left off last weekend and installed (only) two more panels on the north side of the roof.  The first panel took way longer than I expected because one of the neighboring dormer roof panels interfered and I had to cut the panel in-situ.  It would have been too much trouble to remove, trim, and reinstall that panel.  Then I started installing one of the smaller panels along the bottom of the roof.  You would think the smaller panels would be easier to install, but it's even more difficult.  Because the smaller panel sit at a steeper 60 degree angle, I have to constantly hold the panel up as I stand on my ladder and get my drill into position to drive the first screw in.  Also, the north side of the play house is very close to a lot of little scrubs and a lemon bush that force me to position my ladder at a dangerously steep angle.  Thankfully I haven't fallen of my ladder so far! 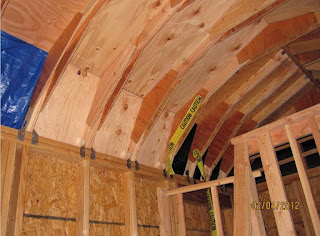